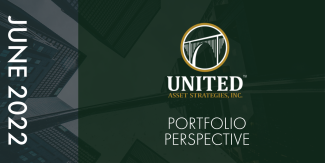 Portfolio Perspective
As of June 9th, 2022

As we mentioned in the quarterly letter, experiencing declines in both bonds and stocks during a quarter is unusual (only 19x over the past 185 quarters). Looks like we are heading to another quarter of declines in both asset classes, as shown below. Consecutive quarters of declines in both stocks and bonds have only occurred 4x in the past 50 years, so it’s HIGHLY unusual.

With bonds and stocks both down in 2022, we have noticed that more conservative clients seem to be more anxious. The chart below shows why:  the 20/80 “conservative” allocation is down 12% YTD vs. the previous worst annual drawdown of 5%. 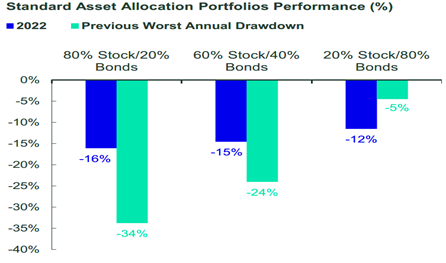 Given the market declines, what is UASI doing to protect client portfolios? Here are some thoughts on the team-based flagship Growth & Income (G&I) strategy:

Outside of G&I, a couple of noteworthy points include: